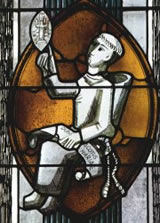 Just as Thomas Aquinas is the most famous theologian of the Dominican Order, John Duns Scotus is that of the Franciscan Order, the order of Francis of Assisi and Bonaventure. Since the 18th century the Vatican has promoted Thomas as the most important theologian of the Roman-Catholic church, which unjustifiably pushed Scotus into a second rank position.

Duns Scotus is well-known as an exceptionally bright theologian capable of very precise analysis of theological and philosophical issues. Although this is much less known, he also developed an overall consistent theological view. In discussion with colleagues in theology and philosophy Duns fully accepted the challenge of Aristotle's philosophy, which exercised an increasing influence on Christian theology.

Duns was able to elucidate many themes central to Christian teaching, both separately and in connection with each other. In this elucidation his new view on divine and human freedom takes an important place. Scotus' analyses still are of major importance to present day's theology and philosophy.

The theology of Duns Scotus, like that of Thomas Aquinas, belongs to the genre of scholastic theology. This theology has a specialised method with a logical bend, which easily impresses the modern mind as being theoretical and dull. This is a misunderstanding, however. Theologians like Scotus and Aquinas believed and lived from their spirituality which was daily nurtured by liturgy and prayer. The same spirituality was the source of their outstanding scientific achievements in theology and philosophy.