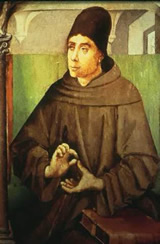 John Duns Scotus was probably born in the winter of 1266 in the South of Scotland. Around 1279 he was accepted in a Franciscan friary in South Scotland. After eight years of preliminary studies in philosophy, or rather in the artes, at Oxford, he started to study theology there in 1288. Having attained the age of 25 he was ordained a priest in Northampton on March 17th 1291.

In the academic year 1297-98 John Duns prepared his first theological course which would change his life. During the next year he gave this course, on the Sentences of Peter Lombard, the most important textbook of systematic theology at the time. During these years (1297-99) Duns wrote Lectura I-II, his lecture notes on the two first books of the Sentences. Scotus' course based on these notes not only impressed very much his audience, but also the Franciscan leadership, and established his name as an exceptionally penetrating and original thinker.

In the summer of 1301 Scotus had fulfilled all the requirements for being a master (magister). However, he was sent to Paris by the Franciscan leadership in order to continue a Parisian career, at the most prestigious university of Europe.

After having again taught on the Sentences for a year, he and some of his colleagues were banished in June 1303 from Paris because of a conflict between the French king Philip IV and pope Boniface VIII. He returned to his studium at Oxford and probably spent the first half of 1304 in Cambridge.

At the end of the summer of 1304 he was already back in Paris where he became professor of theology in 1306. Duns Scotus and his socius continued to work very hard on his Ordinatio together with a staff of assistants. The Ordinatio was meant to be the definitive edition of his Commentary on the Sentences. For this edition he used his Lectura I-III and Reportatio Parisiensis IV and piles of other materials he had prepared in the meantime.

In 1307 Duns leaves Paris again, but this time he left for Cologne in order to become the professor of theology at the Franciscan House of Studies (Studium). On 8 November 1308 he suddenly died in Cologne, leaving behind quite a number of unfinished works, including his Ordinatio.

'In his brief academic career he altered the direction of philosophical thinking in many areas and set it on new courses to be followed for centuries' (Sir Anthony Kenny).